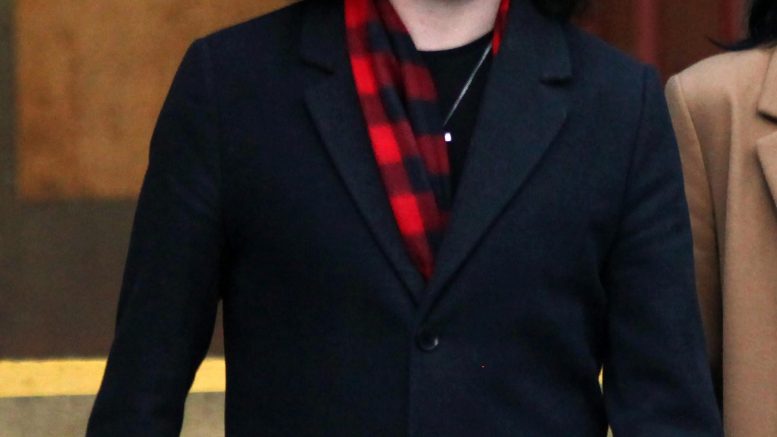 INDIE rocker Kyle Falconer has been slapped with a £25,000 bill after hurling homophobic abuse at cabin crew on a Jet2 flight.

The View frontman admitted the air rage charge in court after forcing a flight from Reus Airport, near Barcelona, to Glasgow to be diverted to France last year.

Singer Falconer, 30, was returning home from a holiday in Spain when he lost the plot after being unable to sit next to to fiancée Laura Wylde.

The Same Jeans singer had to sit in front of Wylde, repeatedly spun round to talk to her, banged into the woman next to him, spilled his drink over her, then squared up to her husband.

He then shouted and swore when asked to behave – before calling the male cabin crew member “a p***.”

The flight had to be diverted to France to have Falconer removed, at a cost of £14,000 in extra fuel costs, compensation for passengers who missed connecting flights by the two-hour divert and other airport costs.

Falconer was arrested in Nantes, France, after pilots made an emergency landing to have him kicked off the plane.

He also had to cough up nearly £9,000 in legal fees and was hit with a £1,000 fine over his antics, with his lawyer saying he had been left almost penniless despite having a successful music career.

Claims he had threatened other passengers while in possession of two bottles were deleted from the charge as part of a plea deal.

Defence solicitor Ian Houston said of Falconer, whose band had a UK Number One album with 2007 release Hats Off To The Buskers: “The band has incurred considerable debts, to the extent that the members are paid a weekly wage of £350.

“He has a fiancée and an eight-month-old daughter – a child he dotes on.

“They do not own a home, they live in a rented flat in Dundee – he has no assets.

“He is deeply ashamed of this, especially the homophobic remark, given he has friends and relatives who are gay.

“He just wants to get on with the rest of his life.”

He added: “At the time he was drinking heavily – he was a binge drinker.”

Wearing facemasks in shops will NOT be mandatory, says Gove – only ‘encouraged’

Brits to bask in temperatures of 23C before sizzling heatwave returns

Get back on buses & trains and go to work, Brits urged as restrictions are eased

The court heard friends and family had helped him pay Jet2 the £14,000 diversion bill, that he has a previous conviction for cocaine possession, spent three months in rehab in Thailand for binge drinking and is due to support Liam Gallagher on tour in America next year.

As he fined Falconer £1,000, Sheriff David Pender said: “An offence of this type in the confines of an aircraft cabin must be very, very distressing to those affected by it.”

Video footage shows him being frogmarched off the flight by cops after his ‘violent behaviour’ forced the UK-bound jet to divert to France.

His beak earlier pleaded for the court case to be delayed so the singer could record a new album with band mates.

But Sheriff Colin Pettigrew turned down the singer’s plea and refused to move the trial date.

Raging woman, 20, threatens to ‘gouge out bus driver’s eyes and feed them to his wife’ in bus fare row