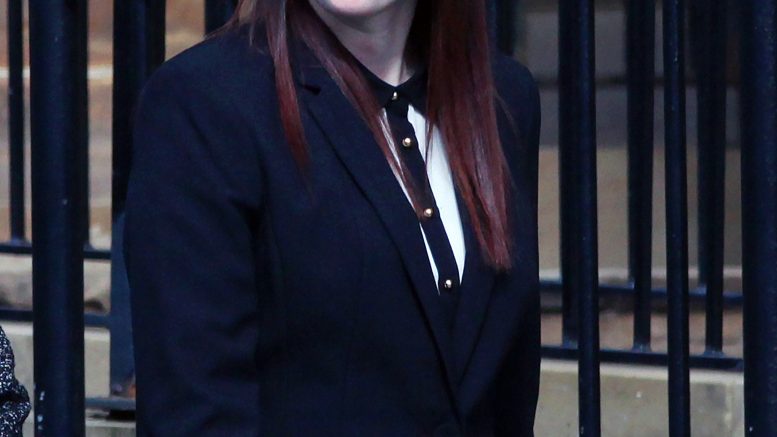 A NURSERY worker was today branded “a danger to children” – as she dodged jail for drawing a moustache on the face of a sleeping boy aged just one with a pen.

But there were gasps from the public gallery and parents of her victims wept as he spared her a prison sentence – instead handing out just a 12-month community payback order.

Houston, 25, was appearing for sentencing at Paisley Sheriff Court after being convicted at an earlier trial of assaulting three one-year-old tots in her care at Happy Days Too Nursery in Busby, near Glasgow.

The trial had heard how she bragged to a teenage assistant how she’d daubed the tache on the little boy’s face.

She also left him in tears by pulling his legs away, causing him to smack his face off the floor.

And she tripped up a little girl as well as slapping a third one-year-old across the chest to get him to be quiet.

Sheriff Pettigrew told her: “Young children, given their age and developmental stage, are amongst the most vulnerable in our society.

“They are unable to protect themselves or report behaviour against them to others.

“Parents and guardians place their trust in the staff at nurseries to nurture their children in a happy, loving and caring environment.

“You occupied a position of trust.

‘NEVERLAND WAS A TRAP’

Nationwide child abuse probe will not be scaled back, promises inquiry’s new chairwoman

‘HE’S NOT GOING BACK THERE’

“The separate assaults upon three very young children, over a period of months, constitute a flagrant abuse of that trust.

“Your actions were not undertaken in a vacuum – they had and continue to have consequences for the children and their families alike.

“You present a danger when working with children – your actions reveal you are totally unsuited to working with them.”

During her trial trainee nursery workers Logan Craig and Jennifer Mackie told how they looked on in horror as Houston carried out the attacks between August 2014 and February 2015.

Mr Craig said she saw Houston drawing on the little boy’s face whilst he was asleep.

And Ms Mackie – who was just 16 at the time – said she was left feeling “uneasy” when Houston admitted to her what she’d done.

Ms Mackie said: “The boy had a moustache drawn over his top lip.

“Laura was, at that time, taking a picture of the boy with one of the nursery cameras with the pen on his face.

“I was still training. This is a qualified member of staff – I’m meant to be looking up to her. I felt a bit uneasy.”

Defence solicitor Vincent Cobb said Houston – who was originally suspended when the allegations came to light before resigning in February last year – continued to deny her guilt.

She will now be reported to ministers as unsuitable for working with children.