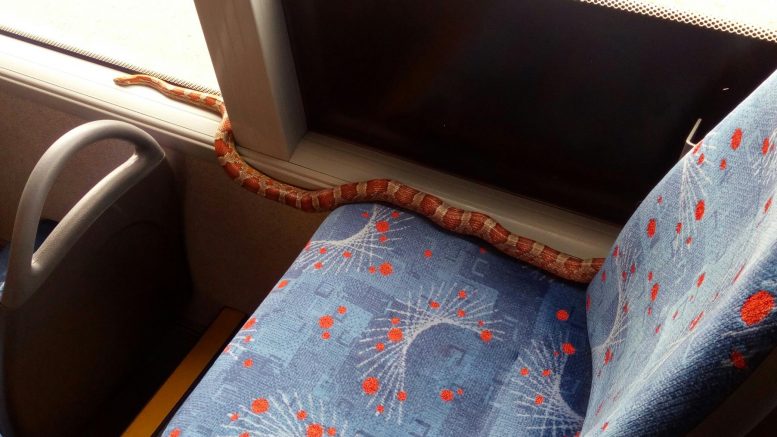 BUS passengers were shocked to find a five-foot-long SNAKE slithering around between the seats next to them.

The alarm was raised after the giant corn snake was found on a bus in Paisley, Scotland, on Friday.

An on-duty supervisor for the bus firm bravely captured the snake and took it to a police station.

It’s believed that the creature belonged to a couple who became distracted.

The snake is said to have slithered out of their bag as the couple were arguing who then got off the bus not knowing their pet had escaped.

The panicked owners then contacted the bus firms lost property office once they realised their precious cargo had disappeared.

They were reunited with their pet after speaking with Police.

Bus firm McGill’s shared a picture of the brightly coloured snake on social media and one showing supervisor Mick MacArthur holding up a bag with the captured animal.

Their cheeky post read: “Our Inspector Mick removing a fare dodging ‘passenger’ from a bus in Paisley yesterday.

“Now safely back with its owner but we hope it ‘adder’ good time.”

A spokesman for McGill’s told the Sun: “It was on the number 26 service in Paisley.

“The snake belonged to a man and woman who were arguing and as they were distracted the snake escaped.

“They got off the bus forgetting their snake and other passengers alerted the driver, who stopped the bus and called in to the control office.

“Mick MacArthur a revenue protection officer for McGill’s captured the snake and took it into Govan Police station.

“Owners realised it was missing got in contact with McGill’s to ask where their snake was.”

Owner of McGill’s Sandy Easdale joked: “I understand the snake was travelling on a ssssssingle ticket but we got no thanks from him for being rescued, assuming he is a he.”

FACE UP TO IT

FUN IN THE SUN

The Scottish SPCA confirmed that police were in touch with one of their inspectors about snake, which has been identified as a corn snake, which is not known to be venomous.

A spokesperson said:”Our inspector communicated with the police to make sure the snake was safe.

“They confirmed the snake had been returned to it’s owners who had been frantically trying to find it.”