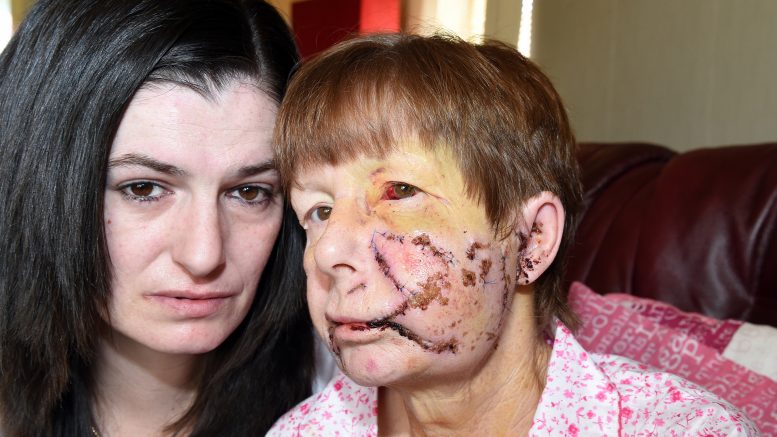 THESE photos show the injuries caused by a horror dog attack – which left its victim needing so much surgery doctors lost count of the number of stitches they used to mend her face.

Sylvia Baillie, 60, was at a neighbour’s home in Paisley when she was savaged by an American Akita dog.

She described how she had stopped by their home after a funeral last Wednesday when the dog suddenly turned on her as she tried to leave.

Sylvia told The Daily Record she could no longer bring herself to look in the mirror.

“I’m distraught. I’ve had flashbacks of the dog launching itself at my face and I can’t sleep.

MOST EXPENSIVE CRASH EVER?

“A surgeon told me that he had never seen a dog bite as bad.

“I’d been at the house and as I got up to leave I went to pat the dog on the head when it just jumped at me and bit into my face.”

The animal was throwing her from side-to-side when her daughter Leeann, 36, rushed into the room and managed to pull the animal off her.

She passed out and needed emergency surgery – during which doctors lost count of the number of stitches used.

Sylvia can now only eat ice cream and soup, while the police have seized the dog and its owners are due to be reported to prosecutors, the Record reported.

Paisley fire: Devastated dad Alex Gibson weeps on Father’s Day as he lays teddies for his three kids at scene of tragedy