A FORMER student today claimed he had sex with his PE teacher after he drank pints, wine, rum and shots at his school prom.

The pupil, known only as Pupil A, gave evidence relating to a list of allegations made against teacher Melissa Tweedie.

Miss Tweedie, who was 23 at the time, is alleged to have partied with pupils at SWG3 nightclub in Glasgow before going back with them to a Premier Hotel in June 2017.

The former PE teacher at Gleniffer High School in Paisley, Renfrewshire, allegedly danced inappropriately with pupils before sleeping with the pupil, who was 18.

The pupil today told the General Teaching Council for Scotland (GTCS) that he “felt sorry” that Miss Tweedie, 27, is being investigated over the event.

However, in a statement he admitted kissing Miss Tweedie in a hotel room before going downstairs to his hotel room and having sex.

Most read in UK News 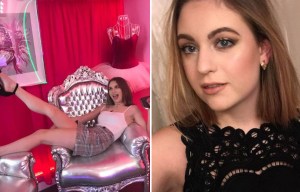 The pupil revealed how he had consumed around three or four pints, a bottle of wine, some spirits, rum and shots before having sex with Miss Tweedie in his hotel room.

He claims Miss Tweedie, who now lives in Dubai and works as a yoga teacher, stayed the night in the room before leaving around 8am the following day.

Speaking at the GTCS hearing today, Pupil A said: “We had no dealings prior to the prom. There were no relations before.

After the prom, students had booked rooms in a Premier Inn that was walking distance from SWG3.

Pupil A said: “I did not invite Miss Tweedie to the hotel. I don’t know how she got there.”

Pupil A said he entered a hotel room in the Premier Inn where he found nine pupils and Miss Tweedie.

After a noise complaint to the room, Pupil A said: “Me and Miss Tweedie were the only two left in the room. We kissed, no one initiated it.

‘WE WENT DOWNSTAIRS AND HAD SEX IN MY ROOM’

“We went downstairs and had sex in my room. She stayed the night and we both left at eight. I feel really sorry for Miss Tweedie, I had already handed in my leavers form.

“In my eyes it wasn’t a student event. This could have happened on a night out.”

During cross examination from the panel, Pupil A said how much he had to drink: “I had a lot, It was my prom. I might have had three or four pints, then a bottle of wine, then onto spirits, maybe a couple of rums and there were shots in between.”

Pupil A asked the panel if he could ask them some questions, before saying: “In my eyes this was an issue involving only two parties. This wasn’t an issue raised by any party.

“When do I get to raise my feelings about what happened? In my eyes it was not an issue I wanted to raise.

“It was an issue that people wanted to raise for me. I have never been asked how I feel about it.”

Miss Tweedie, who was not present at the hearing, is alleged to have drunk shots before telling pupils: “Can we for a minute act like I’m not a teacher.”

Heather Prentice, Deputy Head of Gleniffer High School told the court she had “concerns” about the teacher “regarding her outfit” as well as seeing her and Pupil A taking shots at the bar.

The 60-year-old said: “I do remember it was quite loose, short, low cut.

“I do remember that she looked like she was going on a night out.”

And she said that she had warned the teacher, adding: “I wanted her to recognise that the pupils were getting a bit titillated by it.”

She also claimed that she had seen Miss Tweedie on the phone saying”love, love” and blowing kisses, although she was unsure who she was speaking to.

Miss Tweedie faces being struck off the register by the General Teaching Council for Scotland (GTCS) following the allegations.

The allegations read: “Between 7 June 2017 and 8 June 2017, whilst employed by Renfrewshire Council as a PE Teacher at Gleniffer High School, at the senior prom and immediately thereafter, you danced inappropriately with pupils during the prom, including making inappropriate physical contact whilst dancing with them at SWG3, Glasgow.

“[You] kissed Pupil A at the hotel in which pupils were staying for the night, the Premier Inn Hotel and engaged in sexual intercourse with Pupil A after the prom, at the Premier Inn.

“[You] drank a shot (or shots) at the bar of SWG3, behaved in an inappropriate manner in a hotel room at the Premier Inn by drinking alcohol in the presence of pupils and stating words to the effect of ‘Can we for a minute act like I’m not a teacher’ to a pupil(s).”

Further allegations state the teacher “was alone on a bed with Pupil A and, when Pupil E entered the room, stated to Pupil E words to the effect of: “Technically I haven’t touched him yet.

“[You] were under the influence of alcohol to the point of being inebriated in the presence of pupils in the Premier Inn [and] had awareness that an ex pupil was in possession of drugs and did not report this to the appropriate authorities.”

Tweedie is also alleged to have told the headteacher at the school that she was at home when she was at the Premier Inn.

Police Scotland were alerted to the incident and investigated it at the time.

They found that no criminality had taken place.

Cops lock down Scots road amid reports of ‘shooting’