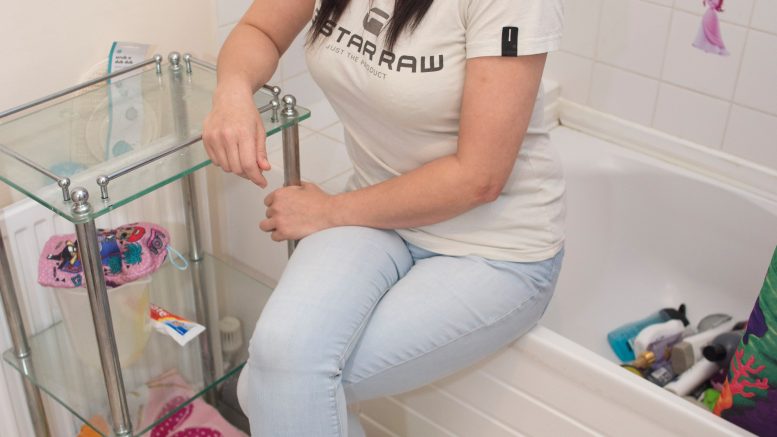 A MUM of five told how she slept in her bathtub for seven months to hide from her stalker ex.

Joanne McGonigle, 38, barricaded herself in the loo and lay in the dark fearing James McPhillips, 35, would break into her flat and kill her.

Her desperate bid to evade the creep came after he bombarded her with thousands of sinister messages following their split.

He told her: “You’re gonna suffer — I promise you.”

Speaking after McPhillips was convicted over his terrifying hate campaign, Joanne, of Paisley, near Glasgow, said: “I would wake up every morning in the bathtub.

“I felt safer in there as there are no windows. I was frightened that he would get in and kill me.

“I’d lie down and turn the lights out — I prayed he would leave me alone if he thought I wasn’t there.”

Joanne and McPhillips were together for 12 years before she kicked him out of their home in the town.

She said he had become “distant” and “secretive” and would regularly fly off the handle for any reason.

McPhillips moved in with a friend but soon began harassing her with vile texts and voicemails — sending hundreds of threats daily.

In one sickening message, the cruel bully pretended to be her stillborn daughter.

Joanne said of the texts: “They would start first thing in the morning and go on until last thing at night. He would say he was my wee girl and that I let her die — that I deserved the fact she is gone.

“He threatened to cut my throat and blow up my car. He’d throw things at the windows and look through the letterbox. I was terrified he would take my kids.”

She added: “My own home was like a prison. The lights and TV were never on. I thought he would kill me.”

Joanne said he told her he’d “put a price” on her head.

She continued: “He told me to watch my back when I left home as he had paid somebody to do me in. I was looking over my shoulder everywhere I went.

“He’d text saying he was outside and he was going to smash my windows in.”

McPhillips, of Darvel, Ayrshire, started his five-month campaign shortly after the couple split in October 2018.

Joanne called cops and he was banned from Paisley.

But she had to continue hiding in her bathroom — as he ignored the order and was discovered in her street.

He was also accused of chasing Joanne along a pavement on a motorbike, but prosecutors dropped the allegation.

Joanne added: We’d been together for a long time but that meant nothing in the end. They need to lock him up — he is dangerous. I dread to think what he could do to somebody else.”