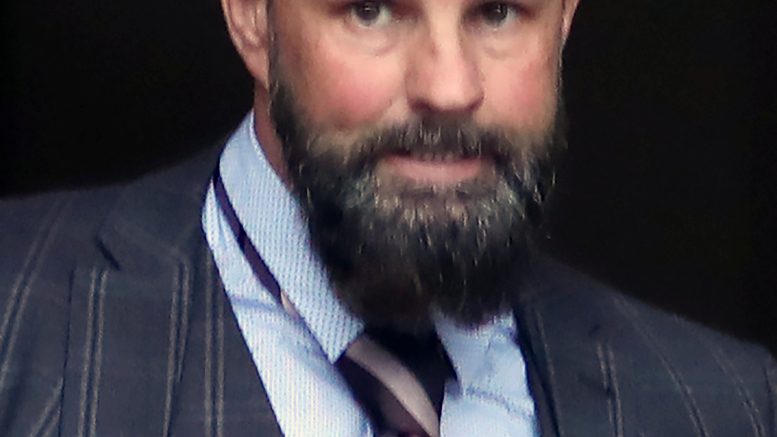 A BRAVE mum has told of her sickening ordeal at the hands of a serial domestic abuser she met on dating app Tinder.

Carly McCabe, 38, said crazed bodybuilder Paul Anderson, 41, attacked her in a steroid and drug-fuelled frenzy after forcing his way into her life.

The control freak also humiliated her in public, made up fake Facebook profiles and even had a tattoo of her lips inked on him after they had been together for a week.

Carly, of Paisley, Scotland, laid bare her six-month suffering after Anderson — who targeted four previous partners — was convicted of assault at the town’s sheriff court this month.

She said of his tattoo stunt: “I had put lipstick on and used a hanky to dab my lips. He took that to a tattooist and got my lips on his hand.
“That was it — after he saw me, I was a part of him whether I wanted it or not.”

She continued: “We never agreed to be in a relationship. We met a few times and he wouldn’t leave me alone.

“He would message me constantly, I would block him, then he would just appear at my door.”

Carly said the muscleman messed with her mind to the point where she believed that at some point he would kill her.

Alarm bells rang when the cruel thug ridiculed her in public during gym workouts.

Carly said: “He would shout and swear and call me names.

“I’d turn round and the whole gym would be staring at me.

“I’m not a bodybuilder. I couldn’t do the things he could.

“He publicly embarrassed me when I wasn’t able to.”

Anderson’s trial heard how he launched a brutal assault on mum-of-four Carly last June when he lost the plot after taking a cocktail of steroids and cocaine as he tried to shed 1½ stone for a bodybuilding contest.

She claimed the monster grabbed her hair, kneed her face and dragged her into her kitchen, where he smashed her head off a worktop.

Cowardly Anderson was then said to have thrown her to the ground and rained punches and kicks on her face and back.

The court was told he grabbed a knife and drew it along Carly’s throat — then made stabbing motions towards her chest while she screamed for her kids.

She was left covered in blood with a black eye, bumps on her head, a bruised back and arms and cuts and grazes as a result of the attack.

Anderson’s abuse continued as he sent her creepy messages despite being banned from contacting her.

Carly explained: “One night I had to head out late to get Calpol for one of the kids. He messaged, ‘Have you got your pyjamas with you?’

“He was obviously watching me from somewhere and thought I wasn’t coming back home.”

Carly tried to break off the relationship numerous times but Anderson vowed to take his own life.

The fantasist also concocted a string of stories which led to Carly being nicked by cops over his false claims that she sent him explicit photos and videos of herself.

She said: “He made up fake Facebook profiles and people, claiming they knew exes of mine and had been saying things about me. None of it was true.

“He would tell people he was in the Army and he has a certificate on the wall.

“But he wasn’t in the Army and he got the certificate on eBay.

“He even had me arrested in front of my children and dragged off to the police station, claiming I’d sent him intimate pictures and videos.

“I hadn’t, the pictures were fake and had been Photoshopped.

“I actually had to strip off for the police to prove my innocence. I have a tattoo on my backside and the woman in the pictures didn’t, so I had to show my backside to a female officer to prove it wasn’t me.”

Anderson, of Barrmill, Ayrshire, admitted his shameful assault in a phone call to Carly where he begged for forgiveness.

In the call, she was heard to sob as she said: “I thought I was going to die. I thought my kids were going to have no mum.

“I’m devastated. You’ve no idea what you’ve done to me. You’ve taken everything from me.”

Homeowners to get £5,000 vouchers to insulate homes under green scheme

He blamed his actions on taking steroids and coke.

But the brazen brute went on to deny the allegations in the dock.

Many of the charges against him were deleted but he was found guilty of assault by pushing Carly, causing fear and alarm and breaching his bail conditions.

Anderson could be jailed for up to five years at sentencing this month.