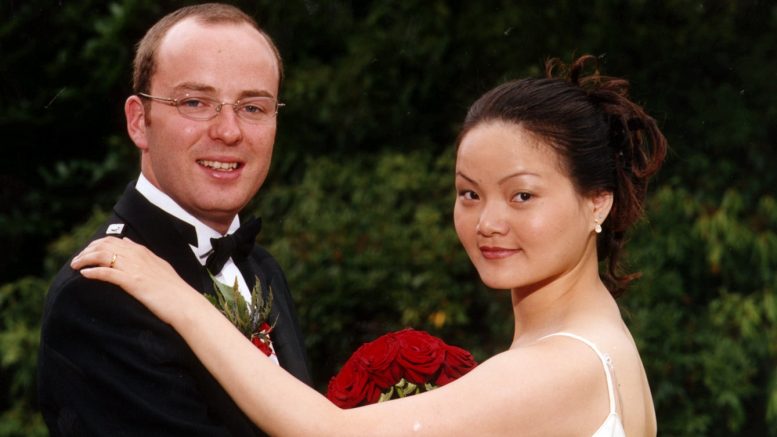 A LECTURER butchered his wife in a “stabbing frenzy” because he wrongly believed he wasn’t the father of their children, a court heard.

Robert Kerr slaughtered Xin Xin Lu, 39, while their sons slept upstairs and then made a cup of tea as she lay dying on the kitchen floor.

The 39-year-old knifed his wife more than 70 times before ringing 999 saying: “I have just killed my wife. I murdered her in a stabbing frenzy”, before adding “there is blood all over the place”.

Kerr, who had grown “paranoid” that a pal had fathered his children later told cops: “I found out tonight they were not mine”.

But the High Court in Glasgow was told DNA checks proved the boys, aged five and ten, are his.

Kerr, who lived in posh Newton Mearns near Glasgow, faced a murder charged but prosecutors accepted his guilty plea to the reduced charge of culpable homicide on the grounds of his diminished responsibility.

It had been concluded that Kerr, who had been a lecturer at West College Scotland in Paisley, was suffering from “an abnormality of the mind” at the time of the attack in April.

Xin Xin’s relatives wept in court as the horrific details of her death were revealed.

Detectives at the scene found bloodstained items throughout the family home.

One police source revealed crews discovered the victim dead around midnight on the kitchen floor with a knife still sticking out of her body.

The insider said: “Emergency services were confronted with a bloodbath. It was clear from the number of injuries that the attack had lasted some time.

“The house was covered in blood. It was a traumatic scene.”

The court heard that weeks before the killing, Kerr, who did stand-up comedy, had contacted his GP complaining of stress caused by “work and personal issues”.

He said he was suffering from anxiety, insomnia, and spoke about “paranoid feelings”.

Prosecutor Jane Farquharson said Kerr, who has been receiving treatment at the State Hospital Carstairs, had “suspicions'”that a friend was the father of his children when he attacked his wife.

After the killing, a friend paid tribute to the “amazing mum” adding: “Her boys loved her, especially the youngest. He is a mummy’s boy. I don’t know how he’ll cope without her.”

The case was adjourned until November.