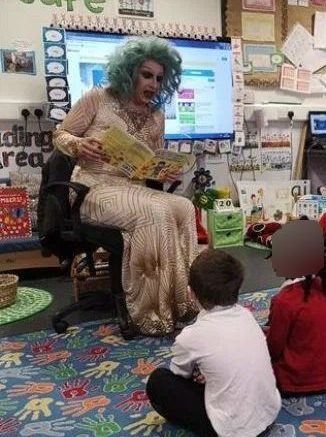 AN SNP MP has sparked fury after she spoke to kids at school with a drag queen who shares sexualised content on social media – then labelled concerned parents as homophobic.

MP Mhairi Black joined ‘Flowjob’ to read a story to kids as young as four at Glencoates Primary School, Paisley.

The drag queen has regularly uploaded graphic pictures to Twitter, including of simulating a lewd act with a sex toy and oral sex.

She also shared a picture of EastEnders star Ian Beale being throttled by Max Branning with the caption ‘I need a Daddy like this’.

Parents have hit out at the school, saying the visit was “outrageous” and “disgusting”, and that they were not informed it was happening.

But MP Mhari Black defended her decision to appear at the school with them – and blasted concerned parents as homophobic.

She said: “You just know that the people pretending to be livid that a drag queen read a book in a school are also the people who run out to buy their kids the latest Grand Theft Auto on release day.

“Your homophobia is transparent.”

However, concerned mums and dads wrote back to her, saying it was unjustified to invite her alone without telling parents.

One said: “This is desensitisation of children to adult sexualised content.

“Any child googling the name of the drag queen who read them a story will see totally inappropriate content too. How can you justify this?”

And another said: “It’s not homophobic to be upset about an adult entertainer in a primary school.

“It shouldn’t have happened. Speaking as an ‘L’ – hardly homophobic.”

Another added: “You pushed an adult fetish onto young kids. You’re not getting away with it. Shame on you, Mhairi Black MP.”

The school and headteacher Michelle Watson were forced to lock down their Twitters after being inundated with complaints.

One parent told the Daily Star: “While I don’t agree with the abuse being given, my kids go to this school, there was no information fed to parents about this happening. Surely that’s a parents choice?

“I’m not opposed to learning about LGBT, but my seven-year old doesn’t need to know what a drag queen is and certainly not the one they had in.

“The headteacher is more concerned about furthering her career than tackling issues that our school has.”

Another wrote on social media: “Their username is ‘flowjobqueen’ and their timeline is full of explicit images of them simulating sexual acts.

The drag queen replied: “Don’t bring your negativity to my profile. I am a drag queen yes who does adult jokes, but I also do under 18 Venus and cater around children.”

On Thursday, the head teacher thanked Flowjob and Black for helping the schools LGBTQ education drive.

They wrote: “Sending abusive messages to a school is not OK, but questions about this are legitimate.

“A male who dresses as a sexualised parody of a women, goes by the name “flowjob” is hardly a role model for primary aged children. Did no one check this?”

Girlfriend, 18, accused of murdering man by running over his head at farm

A Renfrewshire Council spokesman said: “The school pupils at Glencoats Primary are currently organising a series of activities and events to mark LGBT History month.

“All school visits are arranged and managed with the wellbeing of pupils first and foremost however it is clear in this case, the social media content associated with the speaker’s stage persona is not appropriate for children and had we been aware of this, the visit would not have been arranged.

“We are sorry for the concern this has caused.”