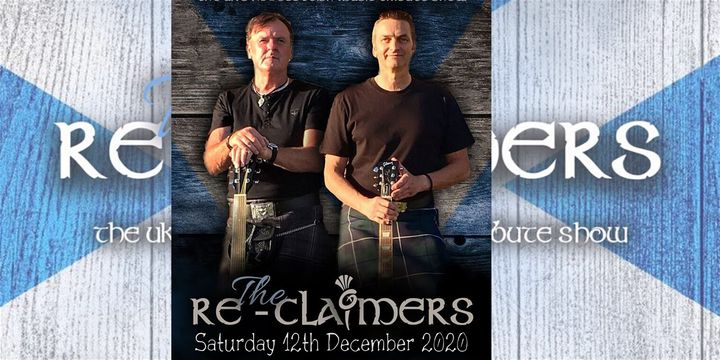 The Re-Claimers The Re-Claimers Tribute Show was formed in 2016 by Vocalist/Guitarists Brian Higgins and Stevie Kane to celebrate the rich history of Scottish popular music Lead vocalist Brian has worked in the music industry for over 20 years , fronting the highly acclaimed wedding band “MALIBU for 12 years across venues all over Scotland and working alongside Stevie, he had many successful years with the duo ”SO BE IT. He was also the Lead Vocalist with Glasgow based Thin Lizzy tribute band “Still Lizzy, playing Rock venues all across Central Scotland, including the Hard Rock Café” in Glasgow Stevie has been involved in bands since the age of 16 and signed to RCA/BMG Records from 1991, spent 10 years recording 4 albums & touring, with Scottish band “The Silencers. Since then, he has been involved with various other touring bands and can still be seen occasionally playing Bass guitar with the “JJ Gilmour Band. Working alongside Brian, he was then involved in Malibu, So Be It and Still Lizzy and using the experience gathered over the years, both members of The Re-Claimers bring years of experience and professionalism to their Live shows. For the last few years,The Re-Claimers have been raising a fan base while playing numerous Bowling Clubs, Miners Welfare Clubs, Holiday Parks and Pubs, receiving positive feedback from their shows and earning return bookings. Their dress attire being kilts, thus adding to the Scottish theme of their show, which consists of 2 x 1 hour sets with a mix of songs from many of the top Scottish Bands and Artists over the years such as, The Proclaimers, Del Amitri, The Waterboys, Rod Stewart,Big Country, Wet Wet Wet, The Bay City Rollers, Frankie Miller and many more.. Music is provided before and during the break in their show, which ensures a full evening’s entertainment. The Re-Claimers are self-contained. They carry a top of the range PA System, a fantastic lighting rig and their own Sound Engineer, thus ensuring a very professional show.